So, if you’ve been living under a rock lately, Dragon Ball FighterZ just came out and saying it’s making an impact would be a huge understatement. In a week, it’s already become the most played Fighting Game on Steam of all time, the fastest selling Dragon Ball game of all time, and a massive phenomenon for fans of both the genre and series, casual and hardcore alike.

Bandai Namco, in a tag team collaboration with Arc System Works, has created something magical. That being said, this is definitely an Arc System Works game through and through. The company is known best for their fighting game franchises Guilty Gear and Blazblue, which tend to require a certain degree of finger gymnastics in order to even be competent in the games, as well as the Persona 4 Arena series, which was made more accessible than any other fighting game out at the time, but still has some manual dexterity requirements to be an effective fighter. In Dragon Ball FighterZ, the skill floor is a whole lot lower than any of those games (which is a necessity, considering the huge draw this game has towards franchise fans that may have never seriously touched a traditional fighting game), but mashing light auto-combos and endlessly super dashing at your opponent will only get you so far, and once you fight someone who knows how to combat that, you’re not going to have a fun time at all.

Lucky for you, you’ve found Basement Road Show’s Guide to beating your friends’ asses at DBFZ — as long as they’re not very good either. Here we’ll talk about some of the mechanics at play in the game, as well as how to string together something that’ll actually bring the pain to your opponents.

Before we get started, I want to go ahead and teach a common notation for these types of games. It may seem like Greek for right now, but “Numpad Notation,” which is named for how directionals are laid out in comparison to a keyboard’s number pad, is one of the favorite ways to abbreviate inputs in the Anime Fighting Game sub-community. And since Dragon Ball FighterZ is ridiculously anime, a lot of the best players of the game will make videos with Numpad notation, so learning it here will help you with not only this tutorial, but it’ll give you the opportunity to make sense of any random combo video you see on Twitter. It may seem like bullshit at this point, but when you see some dope shit posted and you want to know how to do it, knowing Numpad Notation is going to be the quickest way to incorporate things you see into your overall game plan.

Numpad Notation is actually pretty easy to learn. Any movement attributed to your left hand (your Analog Stick/Directional Pad/Arcade Joystick) is governed by a number, and that number is exactly the same as if you were to input that direction on a keyboard Number Pad. Therefore, “Down” is notated as “2”, “Forward” is notated as “6”, “Up” is notated as “8”, etc. As far as the right hand inputs go, those tend to trend to what the button is actually named. For DBFZ, those inputs are L, M, H, and S. Putting these together, if I were to notate a general Anti-Air attack, I would say “2H”, or if I was talking about Goku’s Kamehameha, I would say “236S”. As far as this article is concerned, I will attempt to include Numpad Notation as well as the more common vernacular, but learning the notation will definitely help you develop as a better player of the game. 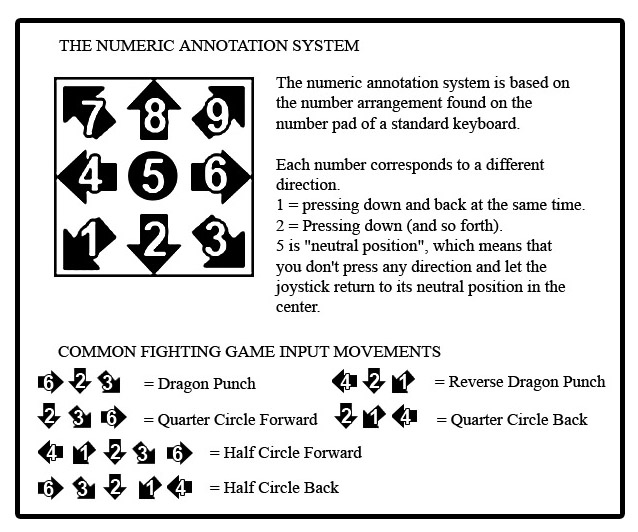 So, first and foremost, our goal is to get you away from the auto-combo and get you playing the game for real. While I could just give you a list of buttons you should be pressing and be done with it, that’s not going to help you at all in the long run, especially if you have any plans to continue your foray into the genre. Instead, for this section, we’re going to be looking more at the Why instead of the What. This way, once you know how the buttons and systems interact with each other, you might be able to show me something I didn’t know. Since this is a beginner’s guide, I’m going to be painting in rather broad strokes, so anything that I say from here on out will tend to be true across most of the cast, but may not apply to any particular given character. If there’s anything more in depth or character-specific that you want to know, feel free to hit up the Basement Road Show Discord and ask me directly; if I don’t already know the answer, I will do my best to find it out for you in a punctual manner.

Our first order of business is to familiarize ourselves with what every button does. This seems like a no-brainer, but I honestly have lost count of the number of times where I’ve seen someone (who is otherwise pretty decent at videogames) beat the shit out of every button they have available, praying to Shenron that something happens in their favor. Generally speaking, 5L is a quick jab (which can be mashed out for an auto-combo) and 2L is a quick, short-ranged kick which needs to be blocked low. 5M is a mid-ranged attack which can generally be jump-canceled (more on that later) and 2M is a low hitting attack which, by itself, knocks down the opponent. 5H and 2H are both launching attacks, with the main difference being the direction you send the opponent; 5H knocks them across the screen and 2H launches them skyward. Before we get into the meat of the combo system, it’s really important that you start hitting buttons with purpose, because that’s going to be a foundational skill that’ll let you pull off big combos.

The first combo that I’ve got for you is pretty basic, and also incorporates a bit of the auto-combo mechanic, just to help wean us off into the big boy stuff. 5LL > 5MM > 5HH > j.LLL (Translation: without hitting any directions, hit the light button twice, and do the same with the medium and hard buttons; that will do a 5-hit combo that will launch your opponent and then Super Dash towards him for more. Then, hit the light button 3 times, performing an aerial auto-combo which knocks your opponent back towards the ground.) This is a good starter combo which is more or less the same as the light auto-combo, but it throws a little extra pepper on it.

The next little bit we’ve got to add in to your combo repertoire is the Jump. There are a handful of grounded attacks (Most notably 5M) as well as a majority of aerial attacks that you can jump out of after they hit, which allows you to do a little bit more with your combo. The next combo here is actually something I pull of in a real match when I either don’t the resources for a huge combo or I want to cut the combo short when my opponent isn’t expecting it so I can go for a new one. 2LL > 2M > 5M > Jump > j.L > j.M > Double Jump > j.L > j.M > j.2H > Super Dash > j.L > j.M > j.H. This combo does a lot of extra damage and builds more meter than the previous one without spending any, which will allow you to utilize your Super moves later on in the match.

A LITTLE SOMETHING SPECIAL

The next step to add in is the characters’ Special and Super moves, which are really what set the cast apart from each other. Without special moves, everyone would just be a collection of punches and kicks, and that’s no fun for anyone. Stuff like Gohan’s 214L, which is a jumping uppercut not unlike Street Fighter‘s famed Shoryuken, or Goku’s 236S, the iconic Kamehameha, is what really lets you know you’re playing the character you selected. Super Moves are an extension of that, and that’s where the real fun happens. You definitely know you’re playing a Dragon Ball game when you see Piccolo’s Special Beam Cannon, Frieza’s Death Ball, or Vegeta’s Final Flash fill up the screen.

With slight exceptions, special and super moves are added to the end of combos to make them hit that much harder, since it’s largely difficult-to-impossible to continue comboing after you use them. This is where things are going to be a little different across the cast, as depending on what special moves a character has, and whether or not they can use their Super in the air, you may have to change things up a bit. Our next combo (Using Vegeta) is 2LL > 2M > 5M > Jump > j.L > j.M > Double Jump > j.L > j.M > j.2H > Super Dash > j.L > j.M > 236M > 236L+M. This is largely the same as the last combo, but it allows you to hit with a Big Bang Attack at the end for that extra bit of hurt.

HELP FROM MY FRIENDS

The last thing I’d like to touch on today is Assists. Contrary to what Goku would have you believe, you’re going to need to fight has a team. Assists will help you do that, and they can vary wildly from defensive usage, helping you in the neutral game, locking down your opponent in blockstun so you can attempt to open them up, or even extending your combos. Even moreso than the special move and super move category, how they are incorporated into your combos will vary based on what character you have on deck, as what timing you need to use and what combos extensions you can get from it will change.

OPENING UP A CAN

“But Antonio, What if my opponent is a filthy block spammer?” First off, stop that. Blocking is an integral part of the game, and “spamming” block isn’t something you should be shit-talking your opponent about. In a real fight, no one is just going to stand there and let you punch them in the face, why would a fighting game be any different? Now, blocking isn’t an absolute defense, there are ways around it. Jumping attacks have to be blocked while standing, and low attacks, such as most character’s 2L and 2M, need to be blocked while crouching. In addition, the Dragon Rush mechanic, performed by hitting L+M, will also break through an opponent’s guard and start you off with a flurry of hits into a combo launcher, just like your 2H, so learning just how to create combo opportunities is a big skill in and of itself. Unfortunately, the art of the mixup is a little bit of a soft skill, so I can’t give you concrete, guaranteed examples of something that will work, you’re just going to have to figure out what works best.

So, there we are. With some of the information here, hopefully you’ll get a leg up on your friends and be the best Dragon Ball FighterZ player in the room, because while you may not hit them the most, you’ll definitely hit them the hardest.